With less than 24 hours to go until the UK General Election, traders around the globe are positioning themselves for another of 2017’s big European elections.

In this article Trade View provides some insight into what is at stake, why the outcome is (or is not) important, and what some of our traders here on the desk think.

What is it all about?

On April 18th this year, Theresa May announced she would seek a ‘snap’ election. One day later this was granted as May looks to cement her party’s stronghold in the UK Parliament.

Without getting too political, May’s mandate was to unite Britain through an election towards the penultimate goal of BREXIT. With Labour polling terribly post BREXIT, May is taking the opportunity to try and squeeze the Labour party out, whilst looking to gain more support to pursue her own agenda (rather than that of the previous administration of David Cameron).

However as some of you may know in politics, what they say and what they do can often be very different things….

Why is this election so important to the markets?

The United Kingdom is the 5th largest economy in the world, and the second largest in Europe. This means it is a key market in global macro trends. The UK is also a very progressive nation and to this day the British people still set trends for the world to follow.

One such event was BREXIT. We have spoken in the past about the importance of Brexit, and discussed its implications to members over the past 12 months. Back then we asked will Britain actually leave the EU? If so, the first step it had to take was triggering Article 50; which it did in March.

The triggering of Article 50 began the formal process of withdrawing from the EU. But leaving is a messy business as the EU has procedures that are both complicated and contentious. Put simply- the first negotiation will be what to negotiate!

Making a decision to split is one thing, separating is another.

And so this brings us to TODAY.

Tomorrow’s election is the next phase of whether a UK government can actually deliver on its promise to lead the UK out of the EU. Whilst this election also comes with its share of party policies; the underlying fundamental vote is still that of BREXIT and which party can (or will not…) deliver it.

So far both party leaders have said the BREXIT debate is ‘settled’.

A win to Theresa May means the Brexit process most likely continues.

However leading up to the election there are concerns May has mishandled BREXIT thus far. She has also interestingly chosen to not participate in specific debates and has neglected certain topics and organisations.

And then there is the question of a coalition parliament. If Theresa May cannot win with a majority, will she have enough backing to go ahead with a BREXIT negotiations?

Over in the Labour camp- Jeremy Corbyn has steered clear of the Brexit debate altogether. A ‘surprise’ win to Labour could see BREXIT turn on its heels!

And so this election has major ramifications for the future of a BREXIT deal which as we know- will have a significant impact on the capital inflow/outflow in the UK and EU.

What markets will be affected the most tomorrow, and how can we trade them?

As an algorithmic firm events like this create opportunities to deploy additional strategies but also to potentially stop certain strategies from trading.

In these events, we also look to our models to understand what is happening ‘outside the charts’. Some of these factor in public sentiment such as polls whilst others look at odds and statistical probability.

For example- one of our models suggests that should the Conservatives win by a majority of over 100 tomorrow, we will see a very aggressive move in the Pound, FTSE and GILTS.

Interpreting this may mean Theresa May sends a strong message to both her own party and Europe that the UK has a clear mandate. In such a scenario, UK assets may appreciate as it shows a strong, effective government.

However anything less for conservatives could prove to be a compromise in the short-term- as the opposite of a strong government (or hung parliament) means uncertainty. And the markets do not like uncertainty!

Now- there is another view…

What if Theresa May called the Snap Election to actually LOSE and not trigger BREXIT?

This may sound extreme, but in the markets people often fail to see the other side of the coin.

Remember what we said about TRUMP last year in this article:

“We feel that Trump may have a slight advantage on the basis that people might actually come out and vote for him – not sure if the poles are counting that in..”

So you’re probably now asking- how would markets react to this uncertainty? Let’s take the GBP/USD for example:

Cable has been range bound heading into the election and this is to be expected given how many markets react to uncertainty.

However what might not be so obvious is the Pound has historically set short-term highs coming out of the election, only to rally post-election. In the chart below we looked at the 100 day leadup (and 100 days post election) of:

And compare them to the current 2017 market environment: 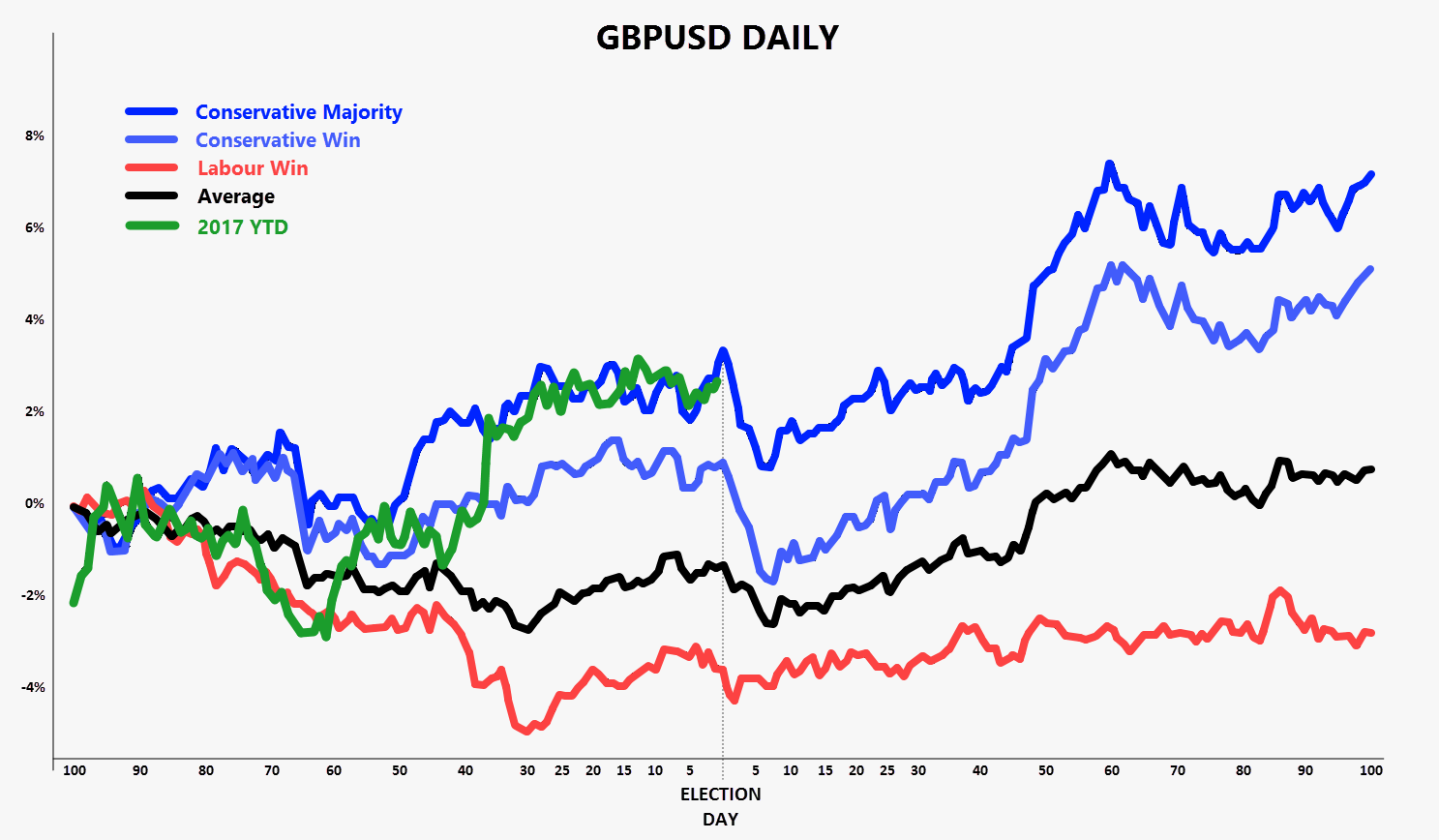 Interestingly- on average a Labour win also results in a move higher and one of the years we are watching closely is that of 2001, which showed a very similar basing pattern prior to breaking higher later.

Here is a comparison for reference: 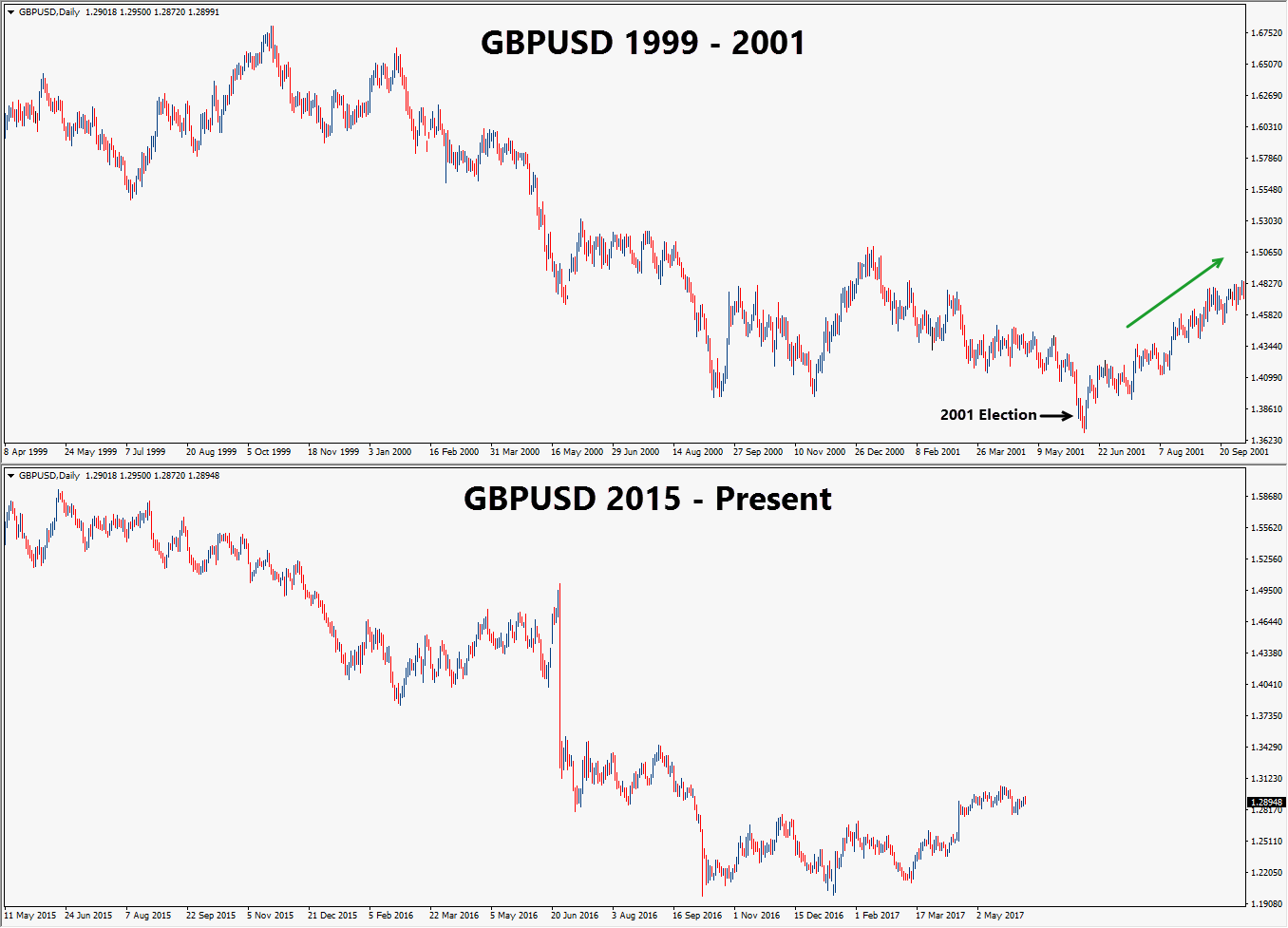 We can see a large and long base that formed over quite some time (not too dissimilar to the current environment); at which point we began to rally once the market had quickly settled for a low post election.

The charts above could prove to be very telling for the next 6-months, but in the short-term, it is business as usual. There will be plenty of opportunities on both the long and short side.

Another point worth noting this year is each time news has surfaced about a hard BREXIT we have seen a very bullish GBP/USD. This is a key fundamental relationship we have been trading and monitoring closely.

What about the stock markets?

Whilst stock markets may be impacted by the election in the short-term, we have outlined in the past that long-term nothing has changed. We are likely to see increased volatility in the FTSE however our models suggest that unlike the Pound, BREXIT won’t be the main driver of European equity markets.

Rather- we are likely to see this come from the major economies- The US, China, and Germany.

At the beginning of this year we outlined a roadmap for members as to where we thought equity markets were headed and so far they have reacted almost perfectly. Here is the chart posted back in February this year: 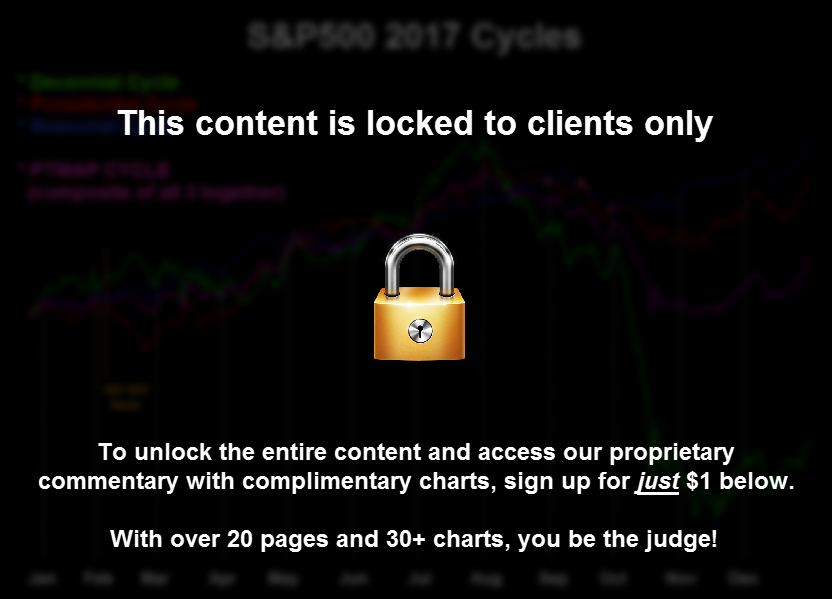 Whatever the result is one thing is certain: we will see heightened volatility tomorrow particularly once voting closes and exit polls come out. This could carry on into Friday.

The key theme however is whilst today’s markets are dominated by algorithmic trading, there are certain events all traders should be paying close attention to. In this instance, the UK Election is a known unknown. The market knows there is an election, but the outcome is unknown.

We will be trading the Election LIVE in our MEMBER PORTAL with rolling up to date coverage all day. Come in and see for yourself.